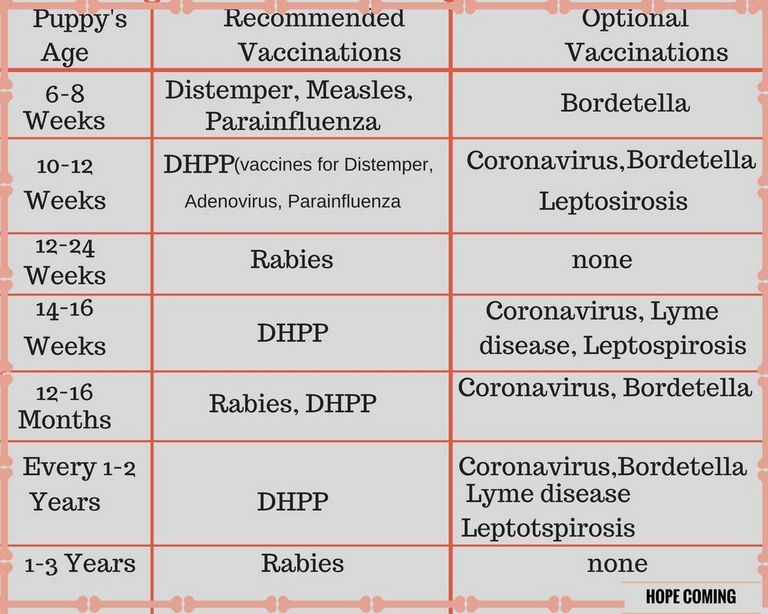 Vaccination schedule. Puppies receive most of their vaccinations every two to four weeks until they are at least 14 weeks old. Some vaccinations are given as a combination, such as the DHLPPC, which helps protect against distemper, hepatitis, leptospirosis, parainfluenza, parvo and corona.
All adult dogs should receive: a rabies booster one year after the first vaccination and every three years thereafter; a DHPP (distemper/adenovirus/parainfluenza/hepatitis) booster one year after the last puppy series; a DHPP booster at two years of age and a DHPP booster in three-year intervals thereafter.
Keep up with your puppy vaccination schedule. Those first vaccinations play a significant part in your puppy's health.. When your puppy is six to eight weeks old, your veterinarian will administer a combination vaccine (DHPP) to protect it .
In general, however, the first-year vaccination schedule for puppies usually resembles. 10 to 12 weeks, DHPP (vaccines for distemper, adenovirus [hepatitis],
What is the DHPP vaccine. The initials DHPP refer to the diseases included in the vaccine. 1. Distemper 2. Hepatitis 3. Parvo 4. Parainfluenza. Commonly called .